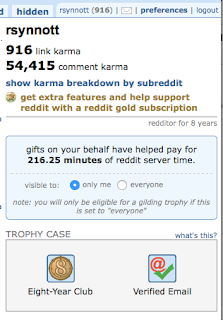 I should have done it a lot sooner.

When I joined, reddit was a reasonably small nerdy link/discussion thing. But already the rot was spreading. Within a couple of years, well, this happened. It largely flew under my radar when it was still a thing, and by the time I heard about it, I thought "well, that's fucking horrific, but at least they got rid of it".

And I started looking outside my nerdy subreddits, and more at reddit as a whole, and, well, there were many more horrors. And, for whatever reason, I stayed, though increasingly, I was sticking to the areas inhabited mostly by, well, reasonably decent people, who were looking in disgust at the rest of it.

And in the last year or so, things seemed to be getting a bit better, or so it seemed to me, or at least so I convinced myself. The opinion on the meta-subreddits had turned heavily against the racist, misogynistic, homophobic content. Some of the more visibly awful subreddits had been banned. But still, the community was fatally flawed; the 'default' subreddits, which all new users are automatically subscribed to, were astonishingly hateful.

And I think I, and many others, wanted to believe that this was a small minority of troubled people who would grow out of it.

And a few days ago, reddit got a new CEO. And this is what finally convinced me to question what I was still doing with an account at this website: 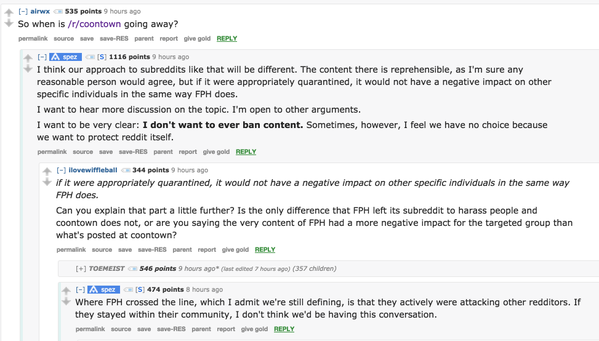 Yes, the white supremacist subreddits are fine to stick about, as long as the don't make too big a deal of harassing other users.

I should really have realised this a long time before. Reddit has a policy of 'free speech', of allowing almost any communities as long as they do not break a few extremely basic rules. Well, that's fine, it's their website. But seeing it said like this, by the new CEO, I don't know. I don't think I want anything further to do with this site.

As I say, I should have realised I needed to leave a long time ago. I wanted to believe that the people running the site were basically well-intentioned, though, if under-resourced and incompetent. I can certainly no longer believe this.

Reddit now contains what are likely the internet's largest white supremacist communities. It almost certainly contains the largest Internet misogyny communities; its MensRights and TheRedPill and similar subreddits are huge. It's the largest gathering place for the reactionary 'gamergate' movement. And perhaps more damaging, beyond these hardline subreddits, racism, misogyny and homophobia pervade the entire site. Sure, the more obscure subreddits, and the 'social justice'-oriented ones (on reddit, social justice is a pejorative term meaning 'not a Nazi') are largely clean of this, but it's all over all of the large subreddits. There are a lot of impressionable young people, who are using reddit and seeing all of this as normal.

I can no longer be a part of this. If you're a reddit user, you should really ask if you can, either.

I'll miss some of it; I'll miss ShitRedditSays, which existed to call attention to awful reddit stuff, and SubRedditDrama, which in its later years, in practice, largely did the same, and the badhistory and badscience and so on subreddits, which, well, mostly called out people using fake history and science on reddit to justify their racism and misogyny, and r/dentistry, which helped me with some of my teeth-related hypochondria and appears to be Nazi-free. But really, this is something I can no longer be a member in. I will have to find another way to waste my time, I suppose.
Posted by Unknown at 11:40 PM No comments: